I’ve got two open port. The http service is running on port 443. Let’s start our enumeration with that.

If we visit the website on port 443 we get a simple page with some information about craft. 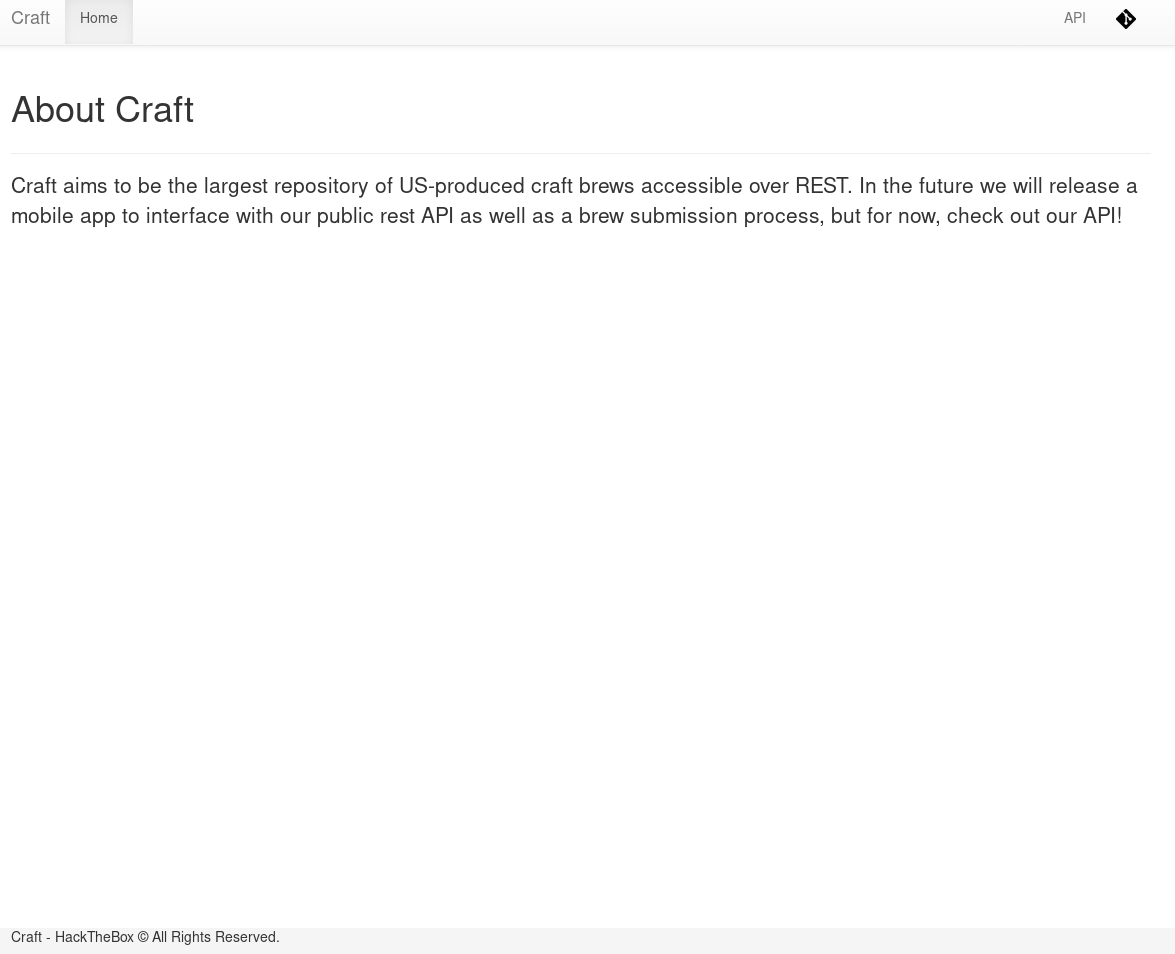 There are two different subdomains. One takes you to api.craft.htb and another takes you to gogs.craft.htb. So first I added following lines to my /etc/hosts

The API shows some endpoints that we can visit. 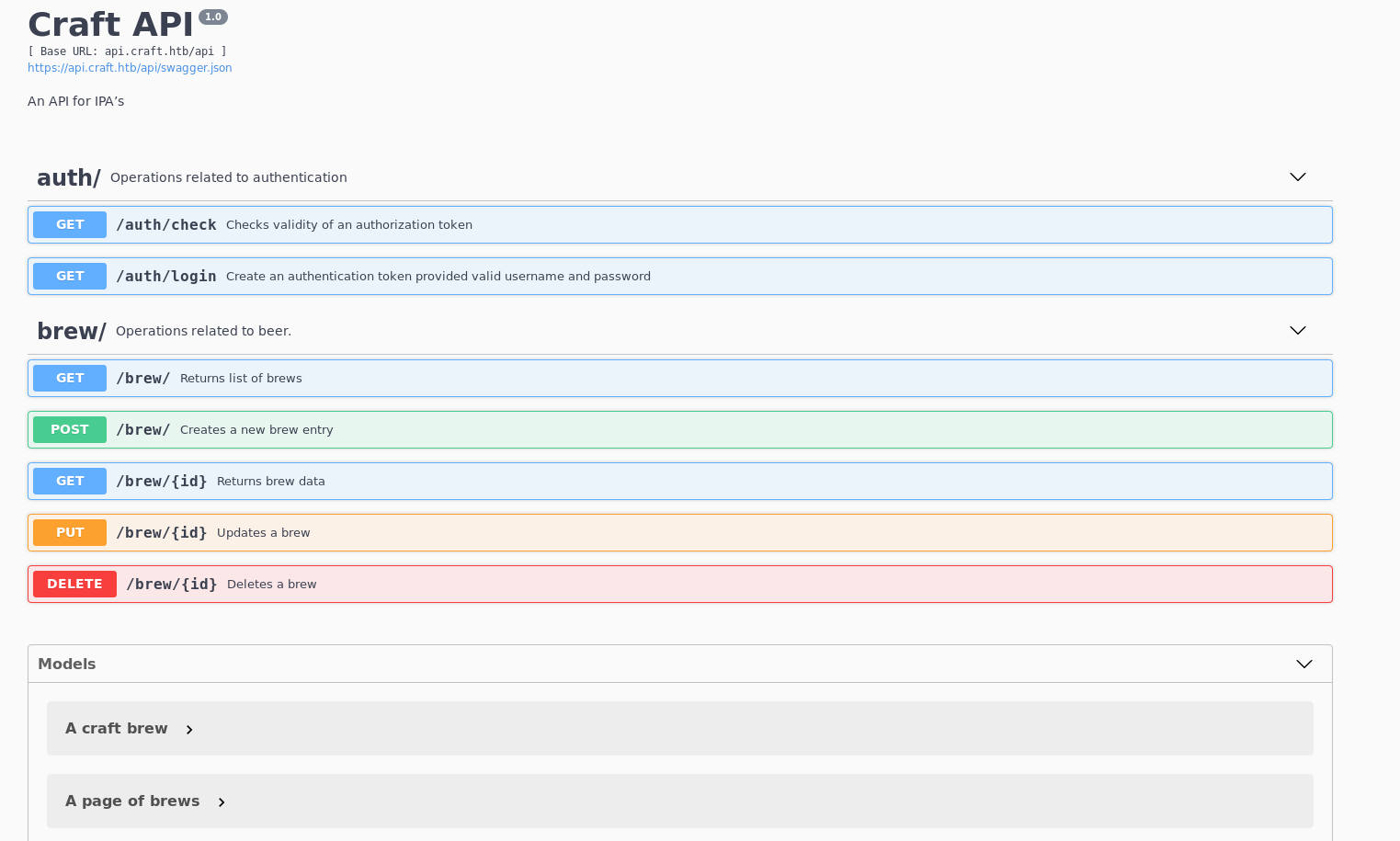 And gog.craft.htb shows a self hosted git service 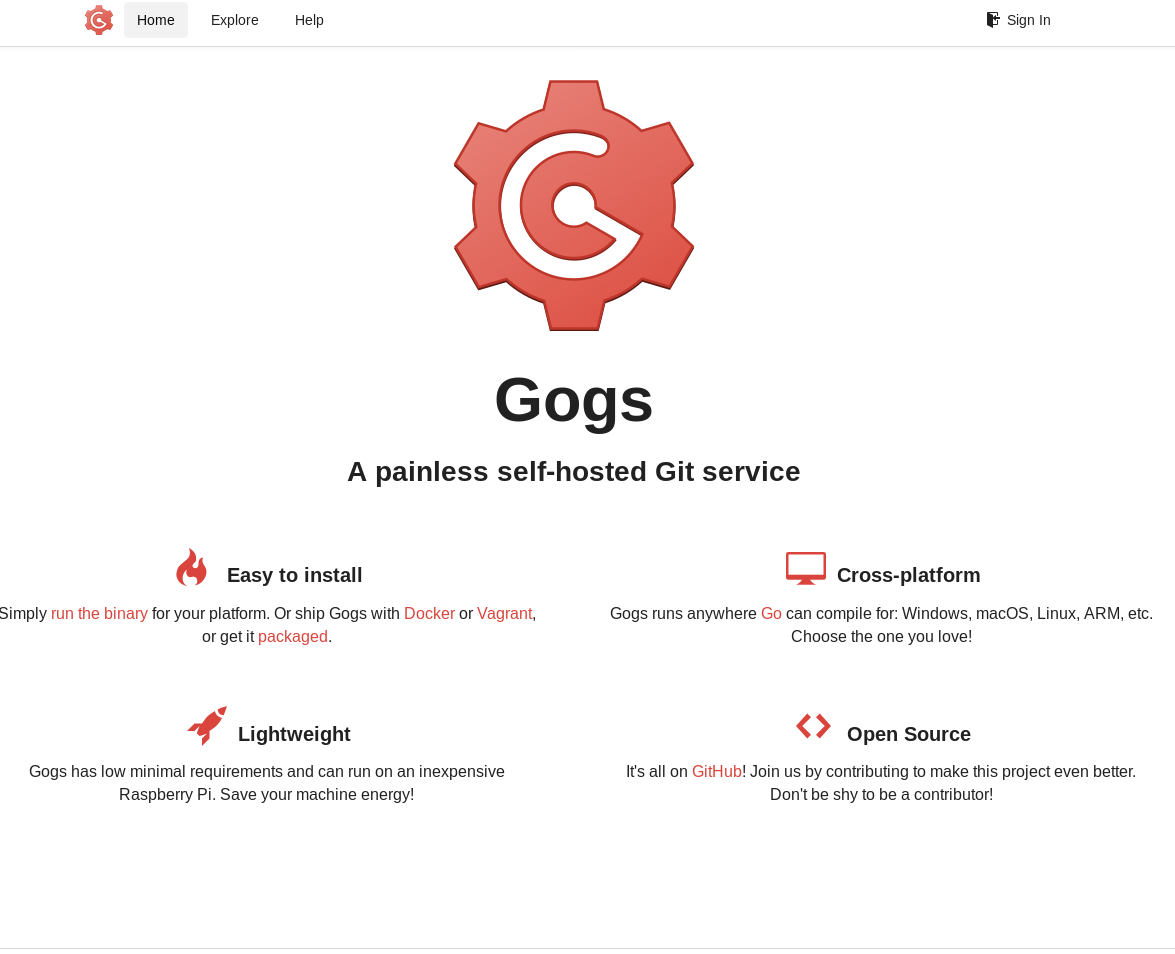 I started to explore the gogs service. I found there was a repository named craft-api and there were 4 users. 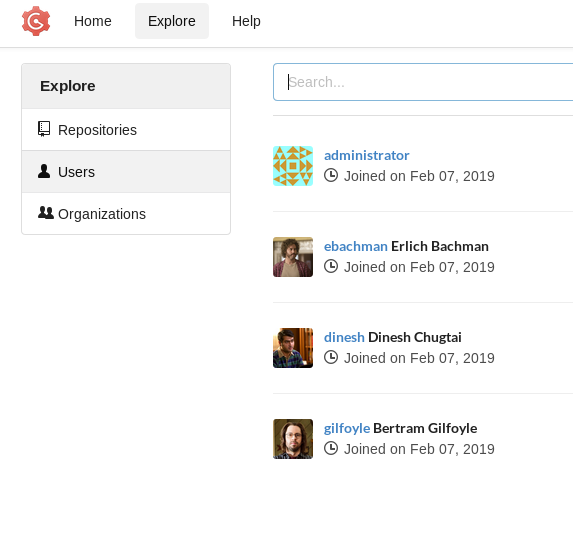 All these names are from Silicon Valley TV show. Since the craft-api is the only good lead we have. I cloned the repository and started to go through the code.

I found some interesting piece of code in craft-api/craft_api/api/brew/endpoints/brew.py

This is interesting because here the author is using eval on the abv value. But the problem is that to get to that point we need authentication token which we’ll get only with proper credentials.

In craft-api/tests/test.py I saw a line

So the auth section is empty that’s when I decided to look at the git log of the repository. In one of them I found that dinesh once pushed with his credentials. 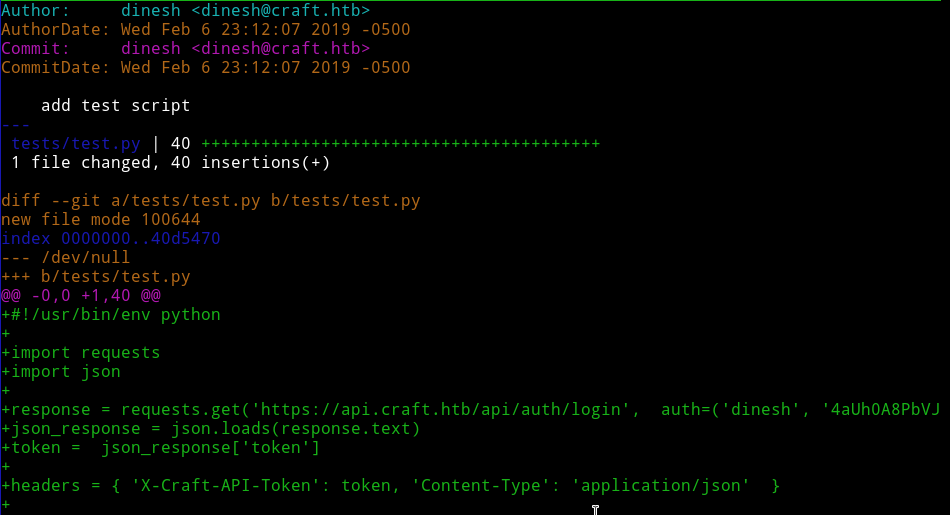 I used this code to get the auth token.

Now we have the token value we can try to exploit that eval we found.

This code will give you shell.

We are root but this hostname looks like we are inside some docker. 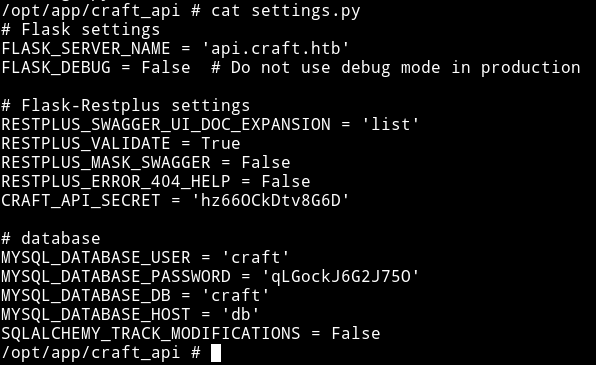 The problem is that there is no mysql on the system. So we’ll have to write code for that. But the author have kinda helped us by providing a dbtest.py file. All we have to do is edit it a bit.

I was able to login as gilfoyle using his password that we found from the DB. And in his account I found a new private repository called craft-infra. 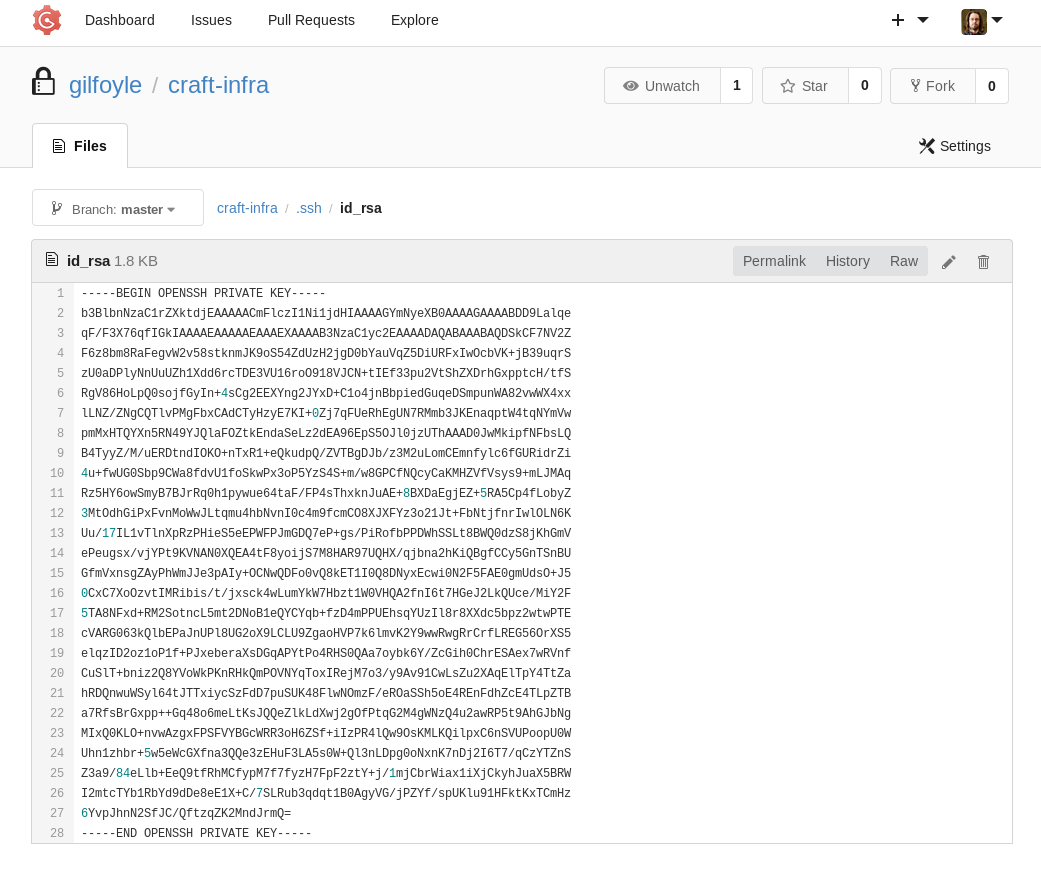 I tried to login into the SSH using those keys and it asked for pasphrase I used the same password i,e ZEU3N8WNM2rh4T and I was in. 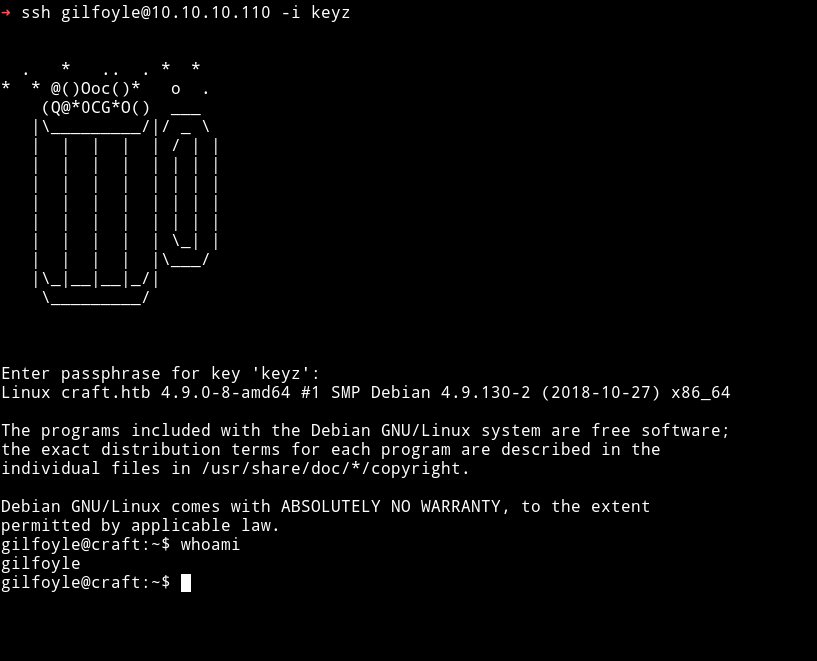 And then finally I got the user flag.

I noticed that there was a folder named vault in that private repository. In that folder I found secret.sh.

I realized that this was a Hashicorp's vault. I Know that it have a ssh option so I used that to escalate.

Here we are using otp mode of vault and for role I used root_otp which I came to know about from the secret.sh and in the end I am ssh-ing into the machine with root. When you run the command you’ll notice that it gives you a OTP and then prompts you for the passphrase. Enter that OTP as passphrase and you’ll get the shell. 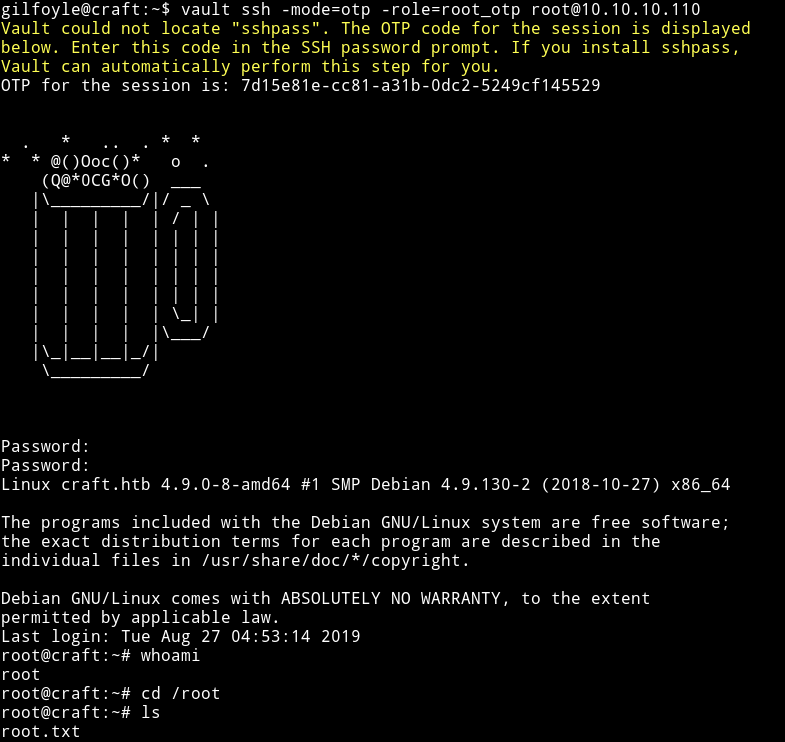 Thanks to rotarydrone for making this machine and Thanks to @jkr for helping me.