I got to know about Google Summer of Code back in 2018, when I learned that my elder brother has done it 3 years in a row. He wanted me to try to get selected for any org that I like. So I started looking for projects on GSoC archives and came across the Honeynet Project org. I was interested in it because I really liked all the projects under it, projects like Snare&Tanner, Thug, etc. I think these projects attracted my attention because they have a feel of being related to the Information Security field.

In GSoC 2019, I again applied for a project called Cowrie under Honeynet Project and wasn’t selected. I think it was because the other applicant, who got selected had a slightly better proposal then I did.

In 2020, I decided to start early and make some more contributions to Snare & Tanner. Also, I spent quite some time understanding the exact work required and make a good proposal for it. The mentor of the project was very helpful from the very beginning. She reviewed my proposal twice or thrice before I made a final proposal submission on the GSoC portal

The work that I proposed in my GSoC proposal was:

I started to work before the official coding begins period, even though I didn’t write any code but I started to discuss everything with my mentor like what we should do first, how we should start etc. Our initial idea was to start with the most important task which was to add support for PostgreSQL so the storage capability of TANNER, can become a bit more stable. In the early discussion, we decided to add PostgreSQL as an optional DB meaning users will have the option to choose between PostgreSQL and Redis DB. But later we came to the conclusion that it would be nice if we can use the combination of both the databases to improve the overall storage functionality.

Currently, in TANNER, the only way to store all the session data (analyzed and unanalyzed) was to keep it within the Redis. In TANNER the unanalyzed sessions data is the unprocessed data that is sent by the SNARE and it contains information like time of the session, user agent, etc. And analyzed sessions are those which TANNER generates after processing the unanalyzed data. The analyzed data contains information like possible owners i.e whether the sessions were created by a normal user or a crawler/tool, type of attacks, etc

Back in 2016 when new features were being added to TANNER, Redis was selected as the best choice because of the speed that it offers. Redis provides its speed functionality by storing data in the memory instead of keeping it in the disk. It’s kind of similar to how a cache of any system works.

As the project grew we started to gather more and more data and storing everything in Redis caused it to consume a lot of memory which resulted in unexpected crashes on low spec systems.

Below is the diagram which explains how the SNARE & TANNER is working with the only Redis:

Disadvantages of this setup

As mentioned above higher consumption of memory on a low spec system would result in an unexpected crash of TANNER server. Also, higher memory consumption would cause other memory issues like slowing down other applications present on the system.

The way we decided to use them can be seen in the following diagram: 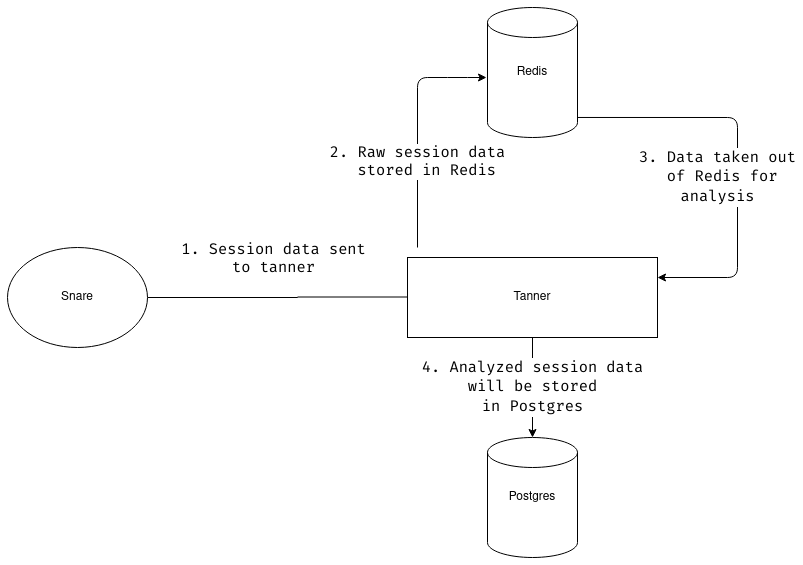 As it’s clear from the above diagram that after analysis we are storing the data in the Postgres and then we are deleting the analyzed data from Redis.

One of the major advantages of having Postgres as the storage is because it gives us the power to perform queries before presenting that data to the user.

TANNER API is used to access the data stored in the DB. Let’s take an example to understand how the API has changed now, we have an endpoint /snare-stats/ which returns stats like Number of attacks, total sessions, etc of a given snare instance.

Now in the old (Only Redis) setup, we were extracting all the data from the DB, and then we were selecting only those keys that were required for that endpoint. But now with the new (Redis+Postgres) setup, we don’t extract all the data. What we do is we run SQL queries on the data before actually extracting the data, this saves us from unnecessary processing.

Detail about the format

We decided to store all the data in 4 tables named sessions, cookies, owners, paths. Below you can see the schema of all the tables: 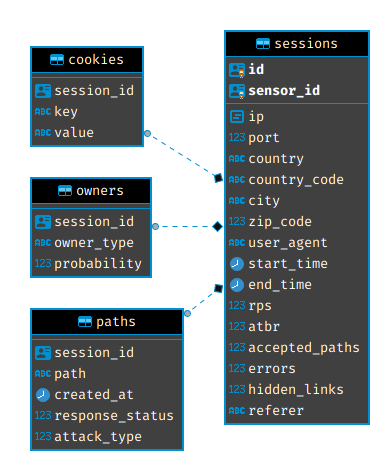 If you’d like to see the initial discussion about this format then check out this small gist that I made.

Initially, our plan was that I’ll spend around 2 months working on this task, and then in the last month I’ll work on all the other tasks that I proposed but little did we know that adding support for another DB wouldn’t be as easy as we thought.

In this, the number 3983 is the accepted_path value which basically means how many paths a bot/attacker tried in one session. But if we checked the count in the paths table it showed 6

The issue was that while we moved the session data between Redis(storing the initial data) and Postgres(storing analyzed sessions) some sessions were missing an attack_type. And all this was a fault of a small function called set_attack_type and it was because we were doing some URL encoding while taking information from SNARE to Redis but wasn’t doing the same after analyzing the data and sending it to POSTGRES.

Now this looks easy and a lot of python devs might see this and be like oh you can split it on space and then it's all easy but it wasn’t that easy. I had to make sure that no unknown filters were passed and the biggest issue was that I had to generate a SQL query based on all the filters so it(API) can get the exact data out of the DB.

So out of the suggested task, I was able to finish the task of adding support for persistent storage and the other small task like adding new template injections or updating the FTP support to use the async library. Even though I had completed the PostgreSQL task in around 2.5 months and could have tried to do another big task but then my mentor suggested that instead of trying to have a lot of new features, it would be better to improve the existing features that we have. That is why we decided not to go ahead with “changing the snare storage and cloning functionality” and decided to do other small tasks.

I had planned that even after the GSoC ends I’ll continue to work on the project but due to this year being the final year of my degree my life has changed a lot. Campus placement has started in my college so now I have to prepare for the tests and interviews. Along with that, I have to prepare my thesis and a major project. So right now I am not sure when I’ll get back to contributing to the project.

In the end, I just want to thank the Honeynet Project org and my mentor for seeing the potential in me and selecting me for this year GSoC. Also other special thanks to the mentor for being so helpful and patient with me.