Another year comes to an end. Just like last year this year also, I decided to do a “year in review” blog post. You can read the 2020 rewind here.

This year I didn’t play much chess. I even stopped my premium membership on chess.com, I might have played a few games here and there. But still, I decided to do an analysis on all the bullet matches I played in 2021.

All my stats were exactly the same as they were in 2020 i.e I’m still playing Scandinavian opening in almost 80% of my games and I’m doing e2e4 as my first moves in almost all of my games as white.

As I said in the starting I didn’t play chess much and as we can see above total game count in 2021 is almost half of what I played in 2020. Also, the heatmap shows that in 2021 I didn’t play games on regular basis. It was more like a few games in 1-2 days and then nothing for quite some time.

Just like last year(2020), I’m still using a Mi Band to track most of my activity and I won’t lie this year there was no activity. In 2020, I had planned to walk around 5000 steps every day and was successful in doing that. But in 2021 I didn’t do any sort of exercise or walking or anything at all. I wonder if that is the reason for an exponential increase in my body weight 😂.

But I’m proud to say that I’ve kept my consistency in sleep. In 2020, my average daily sleep was around 6 hours 30 minutes. And the number is almost the same this year as well.

The monthly average has gone down for some reason. But still sleeping approx 7 out of 30 days is a decent amount of sleep.

I’ve continued to use trakt.tv to track all my watchings. This year also I used the same script(Thanks to the maintainer for maintaining the code) to export my data. But this year instead of using the imdbpy package I decided to use the PyTrakt package, mostly because trakt package did the job with higher accuracy and speed.

Going a bit deeper and focusing on the genre of the movies, this year my focus was more towards the action movies as compared to 2020 where I watched mostly comedy movies. I think it shows the action as the most-watched genre because this year we got some good action movies like Black Widow, Wrath of Man, Sang chi and my favorite from this year, Nobody. I probably loved “Nobody” because the concept behind the movie was pretty similar to John Wick. And I absolutely love all John Wick movies.

When we look at the most TV genre watched in 2021, the top 3 genres are exactly the same as that of 2020. Drama is still on top maybe because of shows like Loki, Peaky Blinders, Black Mirror, Jett, Atypical and many more. But the romance genre has gone all the way down. I don’t even recall which movie I watched under this genre.

We can see that I’ve watched the majority of shows towards the end of August and early September, that is because that was the time when I was on a sort of “vacation” 😄. One weird thing this year is that almost on all days I’ve watched something whether it was just for 30 minutes or an hour. It feels weird because I actually don’t think that’s actually true but I’m just going to assume that the data doesn’t lie and I didn’t mess up during the analysis.

For keeping track of all the books that I read, I use goodread. For 2021 I had set the 30 book challenge and I’m happy that I was able to complete it, even though 1 out of those 30 was a children’s book which only had 38 pages 😂. 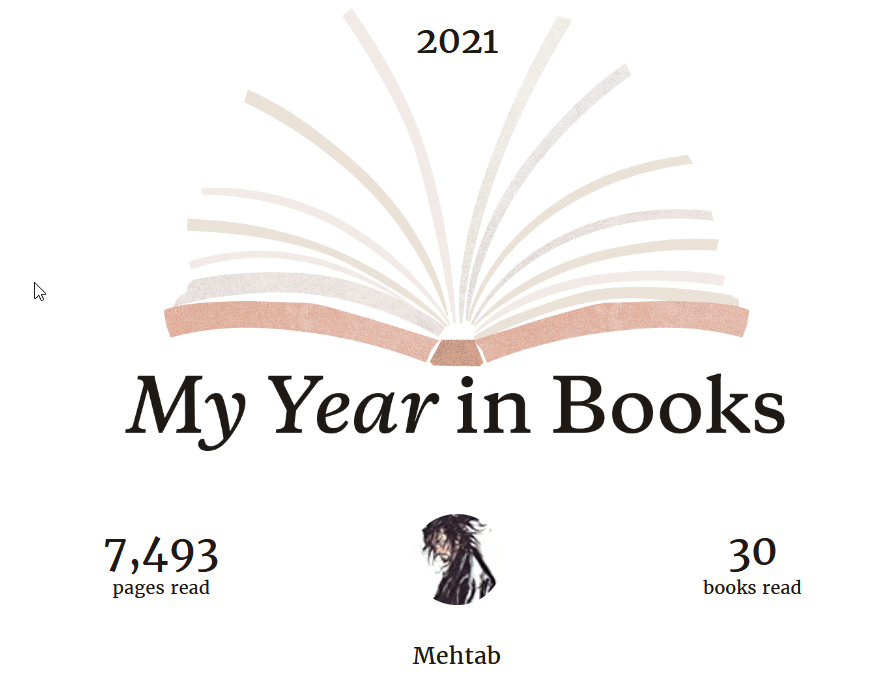 I really enjoyed reading almost all of them but if I have to list the top 5 books read this year, then I would say:

I will highly recommend the first two books. I wouldn’t go into detail about them or even give their summary because I feel that a website like Goodreads would be a better option if you need a summary. But I would say that both of those books are exceptionally well written and have an awesome storyline.

When I’m not reading any novels then I read articles which I saved using pocket. 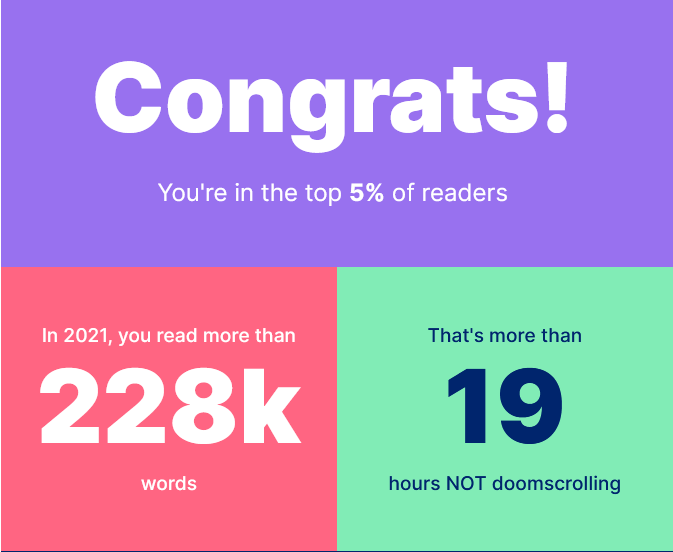 I spent 19 hours reading just articles. I feel 19 hours isn’t much and that’s because I spent more time reading books.

This year I started using Spotify and then connected it with my last.fm account. So no more hassle of getting the extra scrobbler and whatnot. And just like last year, I didn’t have to write any code to generate the following stats.

This year I’ve consistently listened to music and podcasts and everything was on Spotify so a number of scrobbles have gone up.

The top albums have completely changed as compared to last year(2020). In 2020, the top 3 albums that I listened to were all from Eminem but this year it’s different artists and different albums. The funny thing is that my most listened-to song is “SuperChor” and that is probably because of its unique rap bridge. It’s very well written and amazingly performed by Akshay Verma and Dilbahar. I still remember I couldn’t stop listening to it for several days. And that is probably the reason I got the following:

Let’s take a look at my listening clock:

The interesting thing in this is that in 2020 I didn’t have very specific timing, we can see multiple peaks at 10-11 PM and 4-5 PM. But in 2021 I don’t have that, we can see that there is only 1 peak at around 11-12 PM. This is probably because towards the end of the year I mostly worked during those hours.

And unlike last year, this year I have some data about all the podcasts that I listened to. Thanks to Spotify Wrapped. 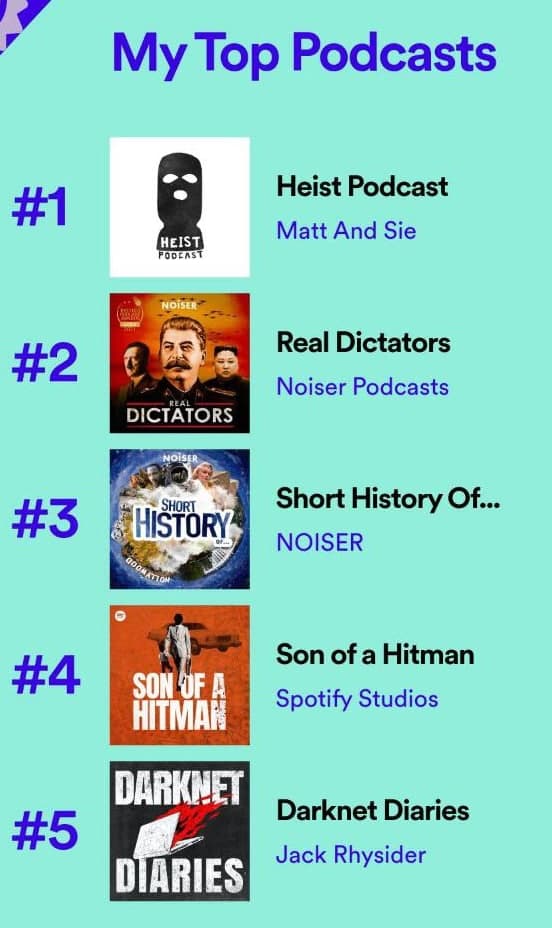 I really enjoyed listening to the Heist podcast. Matt and Simon were really amazing and very entertaining hosts. And they use to bring awesome heist stories. It’s really sad that they have decided to discontinue the podcast after their 200th episode. Moving on, I don’t think I have to say anything at all about Darknet Diaries. It’s probably the best “hacking” related podcast out there.

Both of those NOISER production podcasts, Real dictators and Short stories Of, are another example of me listening to the podcast because of an awesome host i.e Paul McGann. I don’t know whether it was the way he spoke or what it was but I just loved listening to historic events from his voice. I would highly recommend those to people interested in history and historic events.

The reason I started listening to, Son of Hitman was because in the summary I read that it was about Woody Harrelson’s father, who was a hitman. And I was like what!? Then I just listened to the whole thing and I really enjoyed it.

I have an android phone so there is no inbuilt screen time. And that is because I had a yearly paid subscription of App Usage. It is definitely a great app but not open source. I’m only using app usage because Activity watch android app is in the early stages of development. Once it’s available with proper support I’ll start using that. 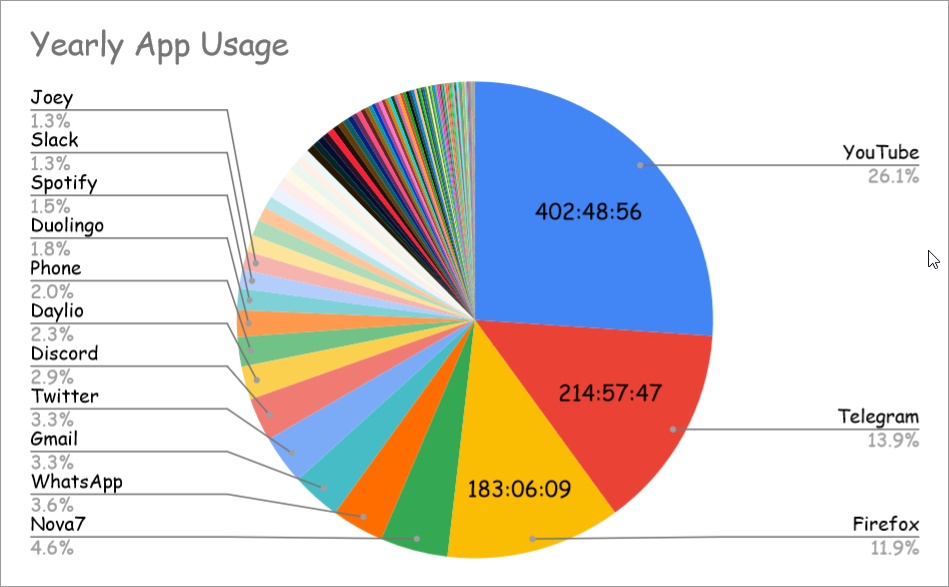 I used the youtube app for 402 hours, that’s ~16 days. And this is just on the phone, I’m pretty sure that I’ve spent around 25-30 days of the year just watching youtube(including time from the android app and on PC/laptop). If you think about it’s just absurd that I spent almost 1 month out of 12 watching youtube.

Moving on to the PC usage. I use Activity Watch to keep track of all the applications I used and for how long, etc. It’s an open-source tool and is under active development. 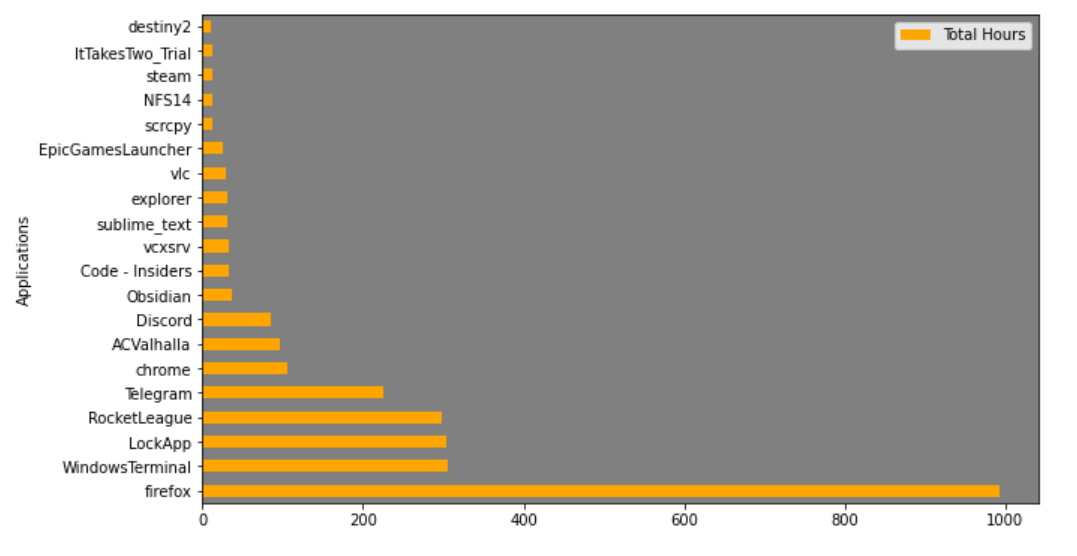 Not gonna lie seeing that I used Firefox around 900 hours isn’t shocking because almost everything is done using a browser. But it’s really interesting to see that out of the top 20 most used applications 7 of them are either games or gaming related.

I spent 119 days on my PC i.e ~4 months out of 12. I think these are big numbers because we as humans spend most of our time either on a cell phone or on PC/Laptops.

Now after looking at all the stats above if I have to summarise 2021 I think I would say:

And if I ignore all the stats and just think then some of the things that come to my head are:

So all in all this was a pretty good year.

If you’d like to play with your own data and do something similar then check out my year-in-review repository which has code for getting your data and generating the graph.