All of the above was running on a Digitalocean droplet. I tried using all of that applications for about a week but then once the excitement of self-hosting wore off I kinda stopped using them, all of them. So I 💥destroyed that droplet💥

Now this year around march/April I was running a few telegram bots for certain things on my raspberry pi 4 and then decided to seriously give self-hosting a try. By seriously I meant things running things that I would actually use. I ended up trying a lot of things I felt I wanted to self-host but then, in the end, only a few of them felt like something I actually needed.

The majority of applications mentioned below run on my Raspi except my wiki and my blog. I still feel that if you need to host a static site then there isn’t anything better than Github pages. Well, actually now that I said it Gitlab pages or even Cloudflare pages are still pretty decent & simplistic alternatives to Github pages. But again, I don’t see myself self-hosting any static site(or maybe I might 😅)

If you’d like to try self-host any of the below-mentioned applications then might find my notes(https://wiki.mzfr.me/#self_hosting) helpful.

Below are the things I ended up trying because the idea of having that application was really nice in my mind but when I actually self-hosted the applications I had this feeling that it ain’t for me.

Things I am using#

Below are the things I tried and am actually using in day-to-day life.

Other than the above-mentioned stuff I also run major *arr applications along with Kodi(I did try plex but didn’t like it). And I don’t really have any comments on this tool. I mean these are stuff that just works perfectly fine.

Below is an image that tries to explain my “complex” self-hosting architecture. 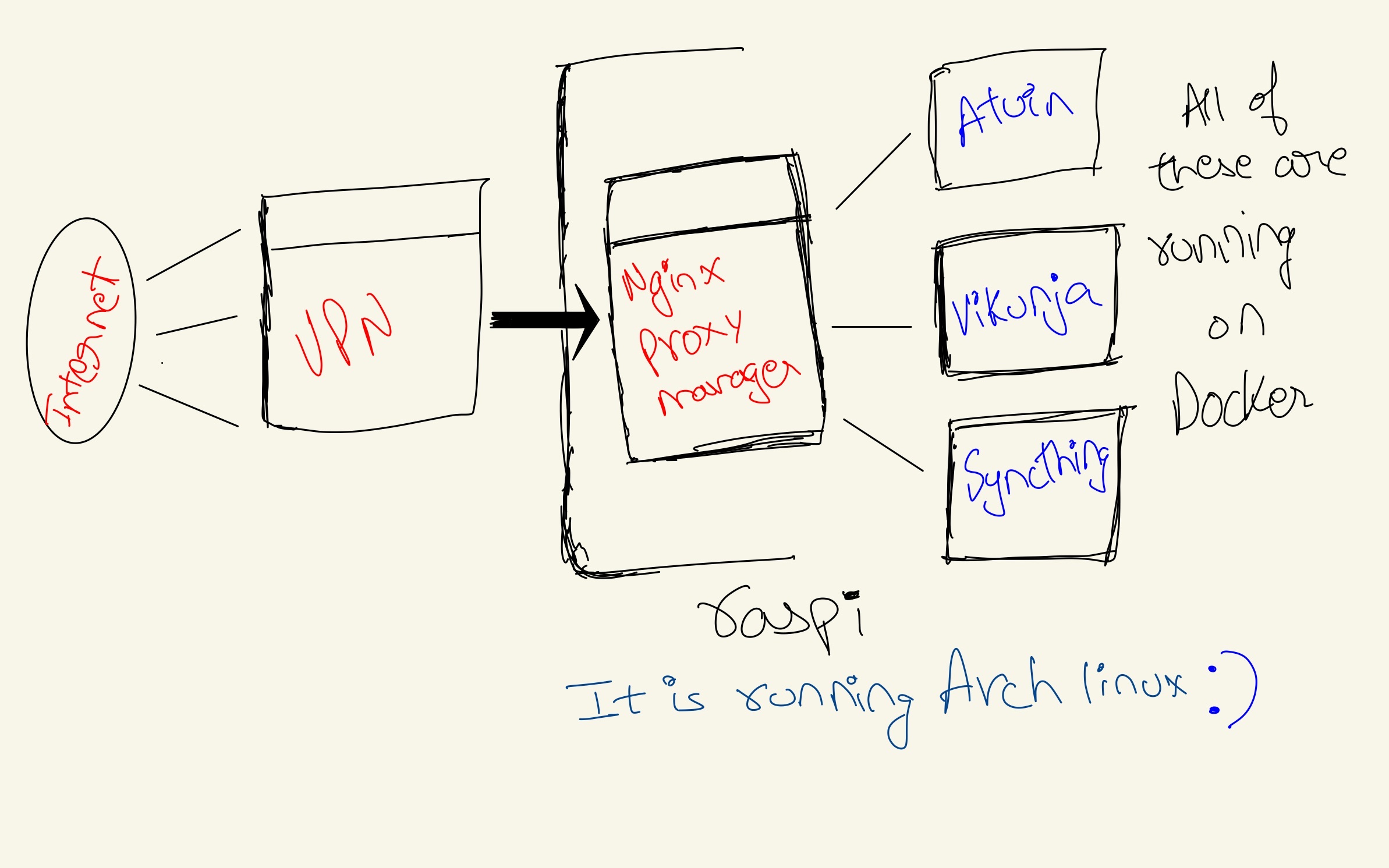 Also, you might notice the artistic effects that I’ve tried to add to the above diagram.

I personally want to move away from Google’s ecosystem, Why? To be honest, just for the sake of trying and to see if it is actually possible to completely eliminate Google from one life. The biggest thing which is stopping me from doing so is Google photos. I personally haven’t found any great alternative to Google photos yet. Another important thing that I’d like to have is a note-sharing app. Even though for personal notes I have a great setup now but sometimes if I have to share a simple list of things or some kind of note/info in which input from both parties might be required, I still find myself using Google keep.

Other than that something I definitely wanna give a try is self-hosting the VPN as well. Maybe something like a head scale or wire guard but I am also kinda also worried that self-hosting an important part of my infrastructure might just not be good.

I would definitely recommend people give self-hosting a try, even if they don’t want to actually use those applications. Just running them will teach you a lot about proper networking and managing containers, etc. And also I’d like to thank the r/selfhosted for inspiring me, I hope one day I can be fully self-hosted :)