There’s a HTTP server running and an SSH server on port 6464. Also there’s another HTTP server on 7331 but seems like it has authentication. 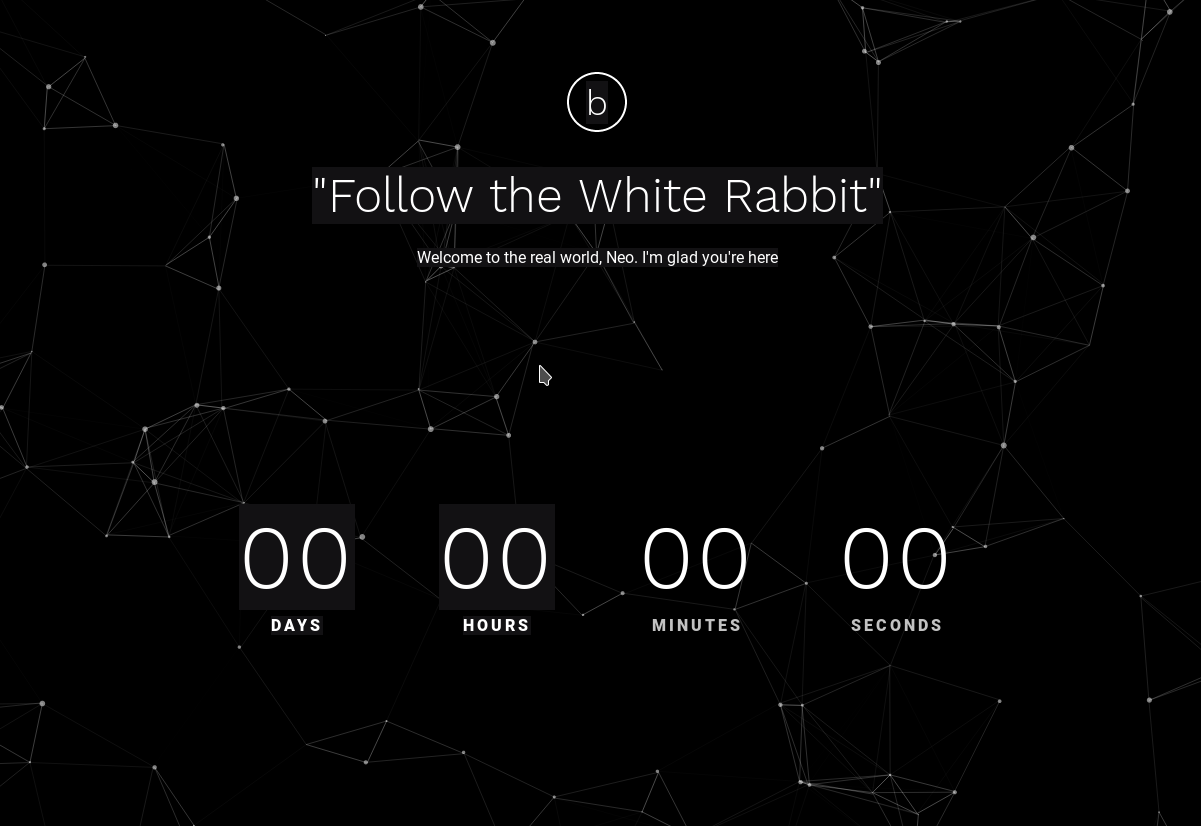 Source of that page had nothing. But as we can see that the website says Follow the white rabbit. Maybe we need to find a white rabbit.

I started gobuster on the main URL and found some pages:

If we visit the /assets/img there’s a file named Matrix_can-show-you-the-door.png and that image is of a white rabbit. So maybe we are on the right track. 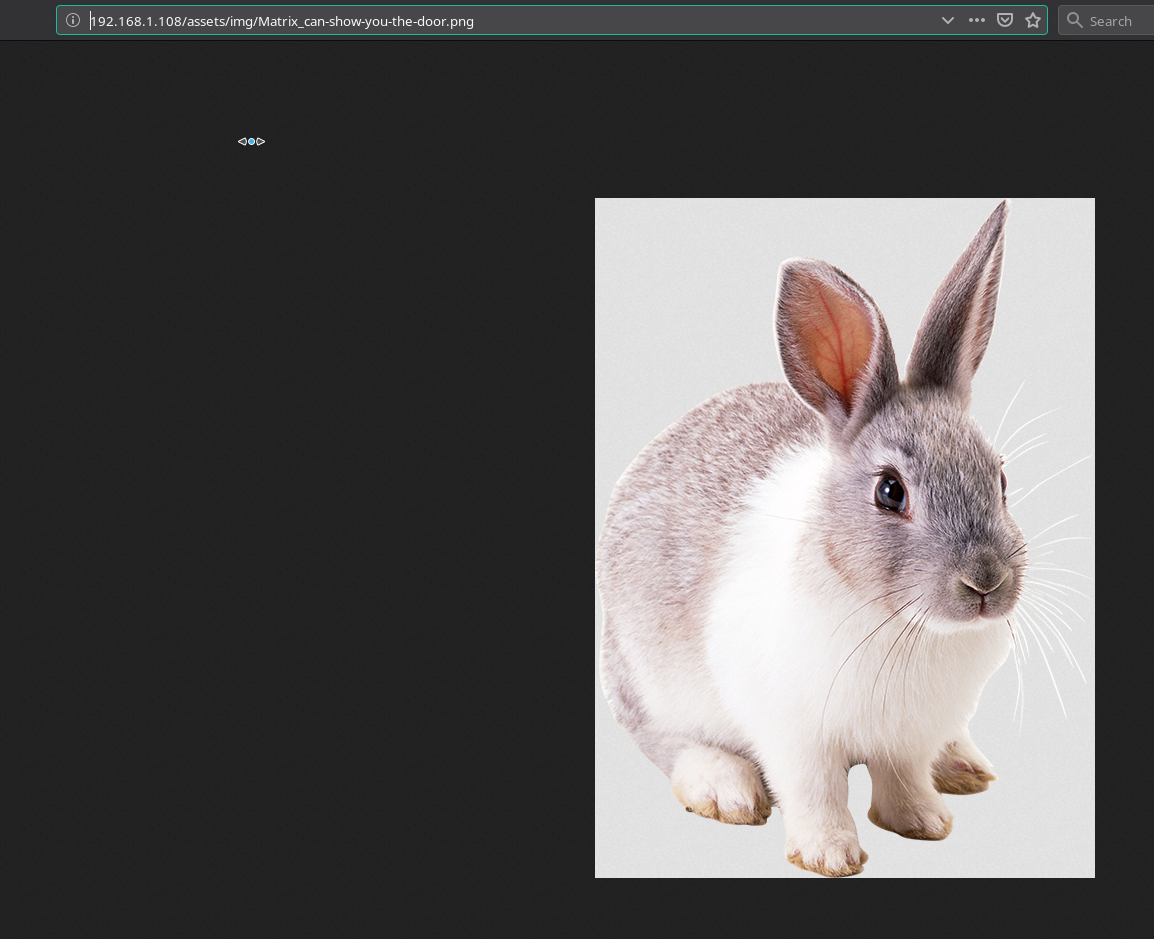 Now before we do some analysis on that image lets checkout that /Matrix/ Page. 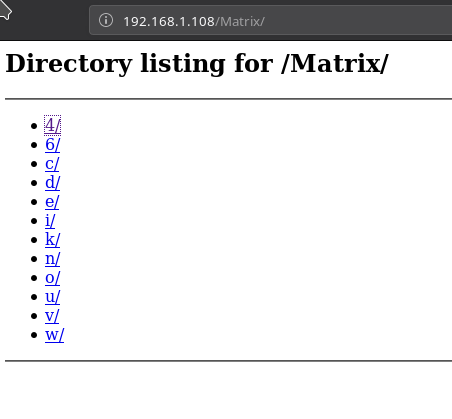 So there are lot of links. Using wget I recursively downloaded all those diectory. You can do that by running:

I realized that all these directory were just to confuse us and the directory listing we should be looking into is /n/e/o for obvious reasons. After few minutes I found something on Matrix/n/e/o/6/4/, it was a link to a gzip file. 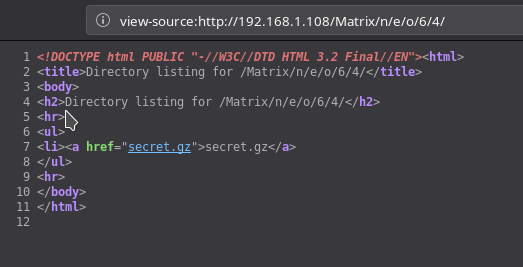 Actually it was with the .gz extension but it wasn’t gzip. It was simple ascii text file. Running cat on it I got some creds:

That is the md5 hash which is equivalent to passwd.

Note:: You can use websites like hashkiller.co.uk or crackstation to crack that md5.

So we have the credentials admin:passwd but not sure where to login.

If you remember the nmap scan we had another HTTP server running on port 7331. Let’s check that out.

As we try to visit the page it ask for password, we can use the creds we found i.e admin:passwd and we are in. 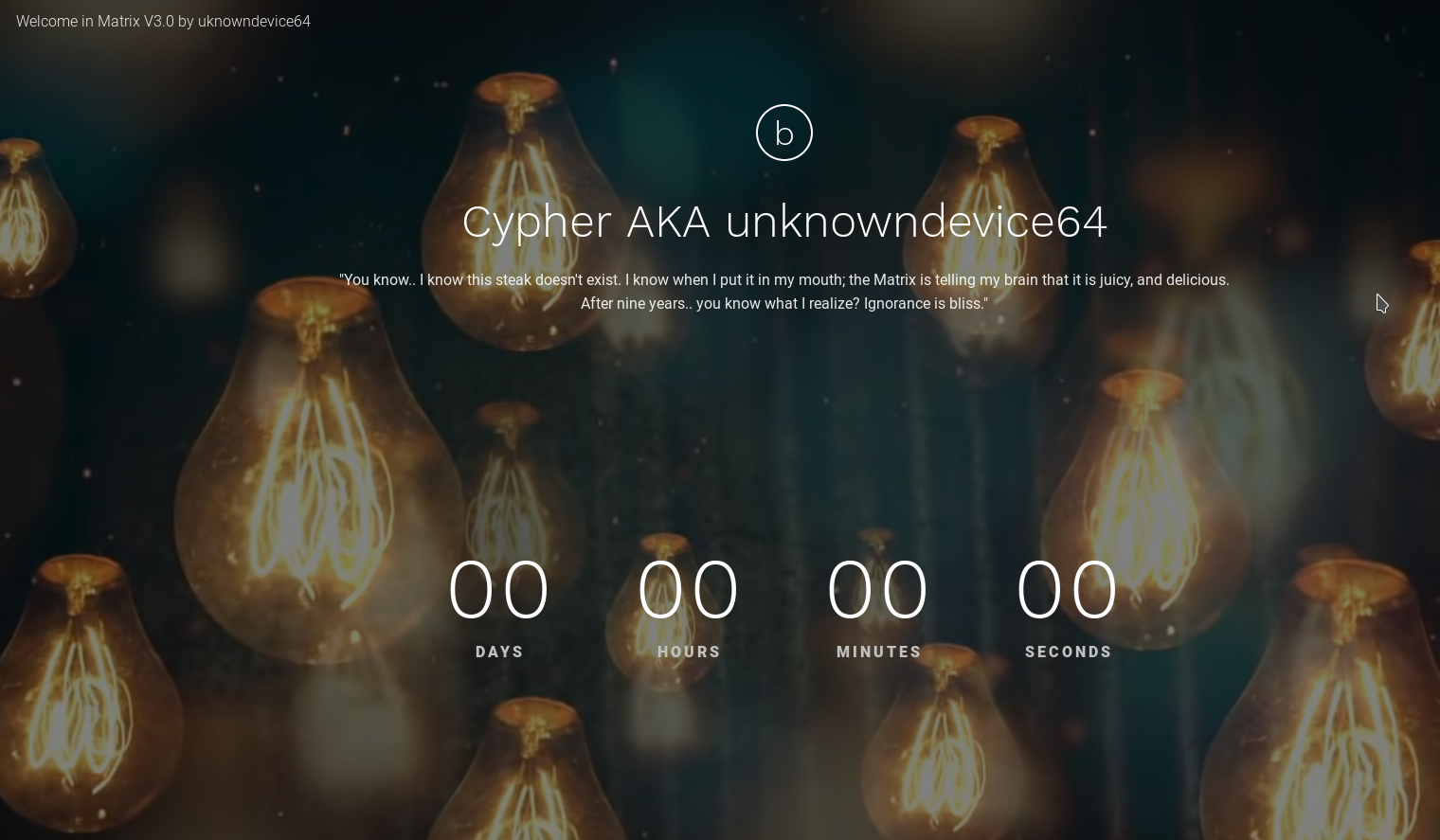 Again on this website I found a path /assests and again in the img/ I found an image saying p0rt_31337 and opening that image I found a white rabbit. So maybe we are not supposed to find white rabbit but instead it resembles that we are on the right path.

But port 31337 is closed. I tried looking for something else for a while which might give me some hint about the port: 31337 but I couldn’t. Then I decided to run dirsearch on this website.

NOTE: I didn’t used gobuster because I couldn’t figure out how to add headers to it. In dirsearch we have an option for that.

In robots.txt there was a path /data.

There was file named data. I downloaded the file and it was a

When I opened the file I got: 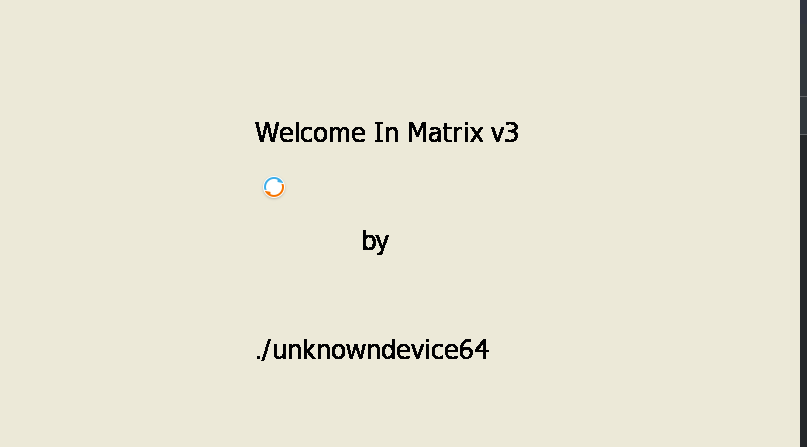 We can open this file in ghidra and see if we can find anything.

Thanks to @Andreas for suggesting me to use ghidra

I was confused on how and where to look and actually what to look for. But thanks to @DCUA7 for letting me know that we are looking for credentials.

I logged in via SSH using those credentials and it was a rbash shell.

Just gonna use the trick that I always use i.e -t "bash --noprofile" ezpz :)

Now we have a proper shell, let’s just use our enumeration script and see what we can find.

I got some other users: 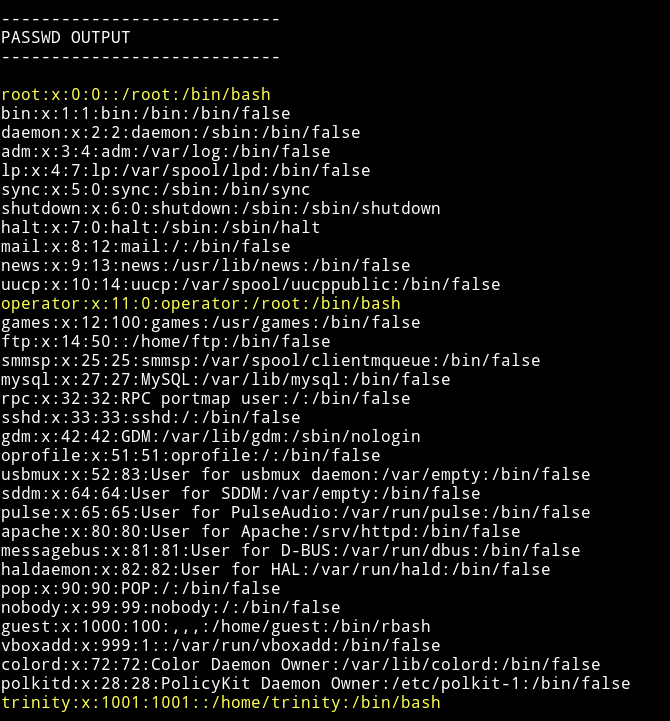 and for some reason I found insane amount of SUIDs 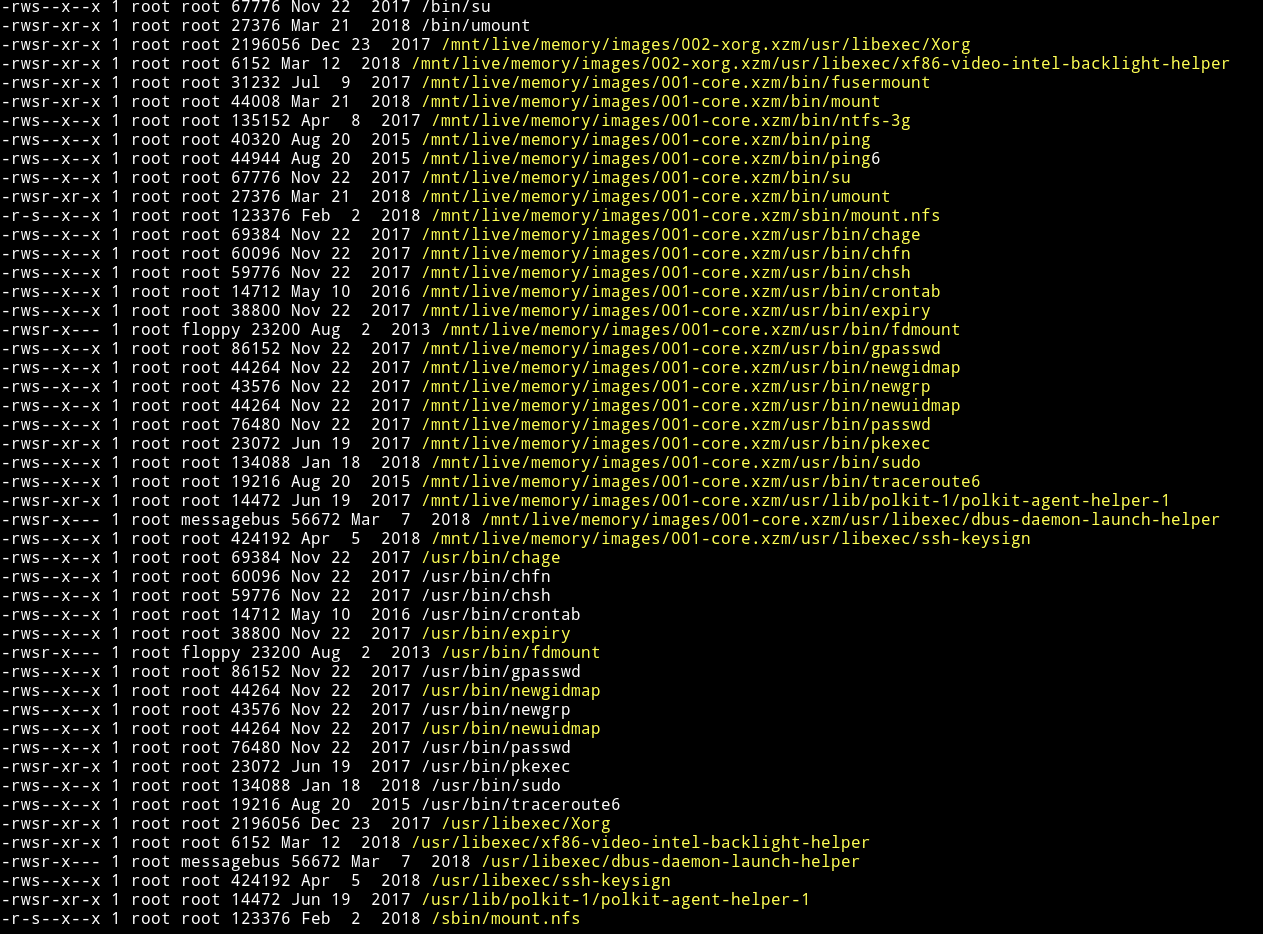 and if we checkout the sudo rights we see:

we can run cp as trinity. Now we need to find a file which can be worth copying :)

and got some files: 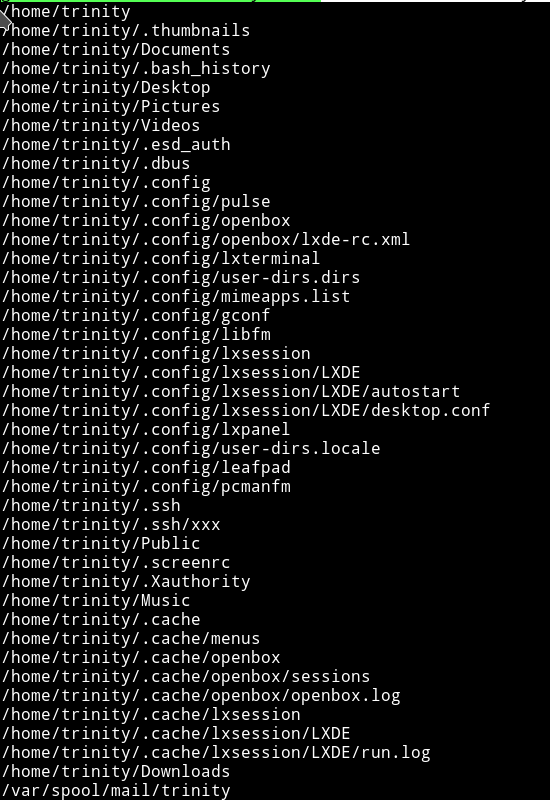 Few files that can bear us something important are .bashrc, /mail/trinity, .ssh/xxx or instead of copying anything from trinity how about we copy something into trinity’s directory. We can put a SSH key into trinity’s .ssh folder and then login as trinity.

Thanks to @DCAU7 for helping with this. I was doing it all wrong I was copying the private key i.e id_rsa which shouldn’t be the way.

It took me more than 2 hours to figure out a way to use /bin/cp for priv escalation.

After this I checked the trinity's sudo right.

This shows that trinity can run /home/trinity/oracle with root privileges but the surprising thing is that there’s no file name oracle in trinity’s home directory.

I was again lost on this part. But then again the GREAT @DCAU7 saved me by givig a hint. He said correct It doesn not exists and thats when it clicked that if it doesn’t then I can make it and it will be executed as root.

chmod that and run it to get the root shell. 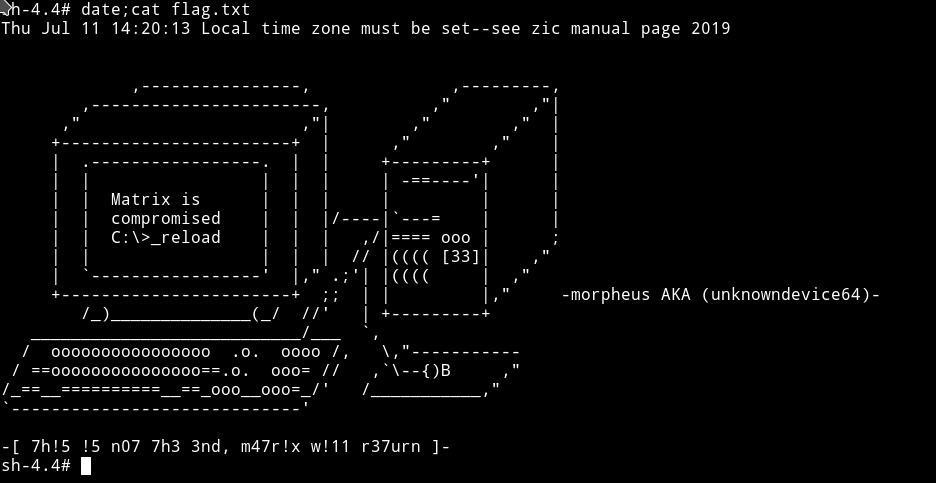 Took me more than a day to root it